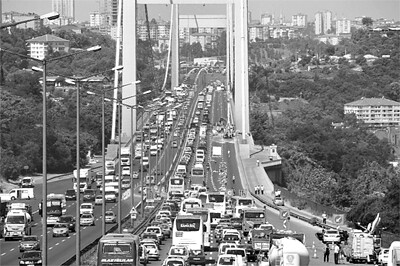 Istanbul, 6th most attractive city of the world for the tourists according to the UNWTO (The World Tourism Organization), by June 2012 report. Besides, counted as the largest city of Europe and third most crowded city in the world following Bombay and Mexico (population is around 14 Million). As a result of this huge population green areas are so limited and existing Greenland are effecting both through illegal and dense housing.

Think that kind of huge structure living non-stop and you need to reach the other side of the city like the other 700.000 inhabitants (Istanbuler) and 450.000 cars per day. This is also a huge challenge for all the city planners, managers, engineers and etc. But there are only two ways to reach the other side of the city (Underground transit system is under construction AKA Marmaray); two bridges that are handling nearly all the car capacity for crossing between two sides of Istanbul even their estimated capacity is 250.000 cars per day.
It is obvious that if you have a car or having your journey with a bus you most probably will use bridges. And now let’s add another challenge to our existing huge challenge; there is a renovation work started one of the two bridges of Istanbul called Fatih Sultan Mehmet (Ottoman emperor who conquered the city at 1453) Bridge. Due to renovation works 3 lanes out of 8 will be closed for 3 months.

Let’s generally calculate the result of the renovation work at the bridge: let’s say 400.000 cars are passing on the two bridges daily than one bridge will have 200.000 cars and lets divide it to 8 (8 lanes of the bridge) that equals to 25.000 cars per lane and totally 75.000 cars will affected from the renovation works. That is a big number even we did not calculated detailed.
Now think that you are a municipality officer or let’s say just a citizen, it is obvious that we need to find new ways for transportation because your bridges are already doubled their capacity. You should find new ways but it is seen that nobody thought a solution and as a result the traffic is more messy these days than ever.

A few days early, I have read on news about the mayor of Istanbul; Kadir Topbas (Personal web sites slogan is Istanbul is my Life unfortunately only in Turkish) has made a press conference that saying; “People are seeing as the responsible of (aiming to say in charge of) the Istanbul”. I think this added a new unique feature besides that I wrote above; the only city in the world which is mayor does not accept responsibility.

I want to say to our bellowed mayor that  not only but primary person in charge is yours, unfortunately.
And for the foreigners / tourists that are planning to come to Istanbul; Istanbul is a city that should be a must in your bucket and if you have chance don’t miss it but sea transportation can be preferred and as an Ex- Istanbuler this is a better and also you will have a chance to have a sight seeing while drinking Turkish tea.

For detailed information about Istanbul at Wikipedia click here